Dr. Klein was happy child, born and raised in White Plains, New York. She worked as a waitress in college, where the tips help fund her education. Working as a therapeutic (and “regular”) horseback riding instructor as well as spending twenty years working at Camp Jabberwocky, a sleep-away camp on Martha’s Vineyard for people with disabilities, Dr. Klein has always been a teacher and a helper.

First earning a BA in English and Women’s Studies from the University of Madison-Wisconsin, Dr. Klein then took her MA and PhD from the University of California at Santa Cruz. Her dissertation, entitled White Writing from the Veld: Female Voices of Southern Africa, 1877-1953, concentrated on Victorian literature in South Africa. Her favorite Victorian writer is George Elliot or maybe Dickens… or maybe somebody else. She has traveled widely, from Thailand, Hong Kong, China, and Southeast Asia to all over Europe. Ironically, South Africa is still on her “to do” list.

Dr. Klein has only two dogs, rescues “Blue” and “Russell” (Westbrook). She likes basketball and the World Champion Golden State Warriors. She loves to read Scandinavian crime novels, and is a fan of Jo Nesbø. Dr. Klein initially came to Pacific Collegiate School in 2000, and loved it. She has two boys, in the third and fifth grades, and took a break from teaching for eight years. This is her second year back at PCS, teaching two courses, and she still loves it.

Before becoming a mother, Dr. Klein deftly performed semiotic analysis of pop culture. She still possesses sharp critical analysis, but now she also cries at every single commercial during the Olympics, despite her overall critique of its nationalism and consumerism. Parenthood has changed her understanding of Ethos, Pathos, and Logos and she lives, and teaches, with her heart on her sleeve. Her students and colleagues simply know her heart is big, wherever she wears it, and are very happy to have her back at PCS. 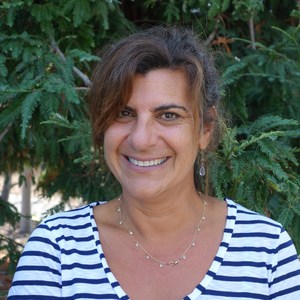